Opinions On Certain Inventions And The West, First Edition

One of the inventions that comes immediately to mind is the "bullet," which had an awesome effect on the Western way of life of some people. It took a lo-n-g, lo-n-g time for the bullet to be made feasible in fast-firing guns and rifles, from 1260 to the 1800's. If it had taken another hundred years, it would have been overtaken by other inventions that would have eliminated or had a devastating effect on the movies of John Wayne and other western heroes as there wouldn't have been any fast draws and maybe the casualty rates of the World Wars would have been ameliorated somewhat. The outcome of a World war with old-fashioned weapons maybe would have been different, too. The Indians might have won out with their bows and arrows in our little wars, too..

The invention of chewing gum should have had a more intrusive effect on cowboying and smoking. Chewing gum was supposed to be a great substitute for a cigarette, but I don't recall ever seeing a movie where Mr. Wayne opened a pack of gum before shooting a bad guy, but several had to have a last cigarette. The first factory to make chewing gum was opened in 1870, right in the middle of the cowboy and outlaw heyday, and there should have been much more chewing of gum instead of smoking the stogy or ciggy. Some of the saloons were so thick with smoke and tobacco juice that you couldn't see a person standing six feet away. That's a mite exaggerated, but if  only they chewed gum, there would have been less lung disease and cancer, maybe.

Dynamite blasting caps, invented by Alfred Nobel (Father of the Peace Prize?? Yes, the one and the same. Photo below.) in 1863. You can blame all those safes that were blown up in the banks and the train tracks destroyed on Mr. Nobel. It sure has made movies exciting, though. And there were even a few dams blown to Kingdom's come by water-starved Westerners, I hear. If Mr. Nobel had opened a pack of chewing gum and thought about it, we may not have all that chaos and destruction. I wonder if he ended his life with a bullet? No, he didn't.

One more today. Alfredo Binetti or Alfred Binet invented the first intelligence test, later known as IQ test in 1911 or thereabouts. He started studying children in 1899 and wrote a book, Experimental Studies of Intelligence (in translation) in 1903 which set the stage for later tests. Hmm-mm. 1899? Almost missed the whole Western era. Maybe if he had came along, say, in 1869 and threw some light on the matters of intelligence, there wouldn't have been so many crazy outlaws running around shooting people, like Billy the Kid and the like. I'm not saying Billy was unintelligent. I'm saying that if he had a psychiatrist back then before he began shooting people, he may have turned out a better person, and an IQ test may have gotten him on the right path. That's all I'm saying. 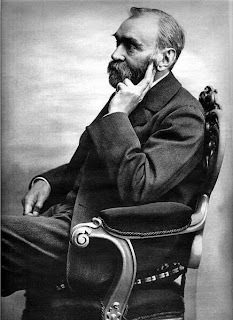 Photo of Alfred Nobel in public domain due to copyright expiration (Wikimedia).