Sun City (The Retirement Capital of the West) Weather Report

Everyone in the U.S. of A., just about, knows when Arizona gets a little rain and this weekend is probably no exception. It started raining Friday night and has continued off an on through Sunday PM, dropping a mighty sum of water (about an inch-and-a-half) on Sun City. The snowbirds complain like the devil, but the year-round livers (literally) accept the rain as a special gift from Above. And to prove there has been a downpour, here is a picture of the clouds that precipitated it: 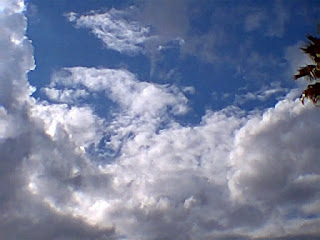 This picture (above) taken at approximately 3 PM shows a little break in the mighty storm that has been dropping all that rain. 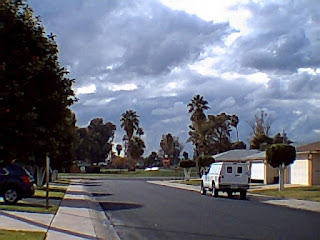 And this one shows the partially dry streets with a truck that didn't get washed away. If it had been in the gulley at the end of the street it would have certainly been carried to the New River by the amount of water gushing down the gulley. 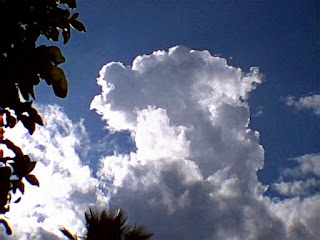 And here is a picture of a cloud that looks similar to a nuclear bomb explosion with the sun shining brightly on it in the aftermath of the terrible storm that brought so much rain to Sun City. 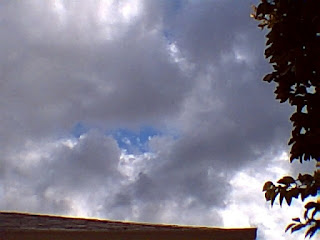 As the storm rolls passed this pic shows the clouds trying to re-group for the second blast that is coming tonight and Monday.

Of course, this is the week that starts the Waste Management Open Golf Tournament here in Scottsdale, the big party of parties where everybody gets sloshed on the inside and maybe the outside this week, although the sun is supposed to show itself starting late Tuesday through whenever. I hope what's-his-name's joints are not too bothered by all this bad weather. He has to make lots more money to make up for all the taxes California is costing him.
Posted by Oscar Case at 3:18 PM 7 comments: Links to this post

Open Road Media has asked me to mention Peter Bowen on my blog, that is the release of his e-books Western series. Peter Bowen is the author of the Yellowstone Kelly series and the Gabriel Du Pre mysteries. The Yellowstone Kelly novels take place in the Wild West of the 1870s. Reminiscent of Larry McMurtry's westerns, they feature a hilarious and sly witted scout whose adventures range from Buffalo hunts in the Zulu War to joining the Rough Riders with Butch Cassidy and the Sundance Kid, says the e-mail. I read at least one of of the Kelly series a long time ago, but never got around to his other writings. It must have been good in that I still remember it, but have forgotten everything else about it. I will have to venture further into the series , as I'm easily pleased and like writings with humor in them.

Anyway, here's the site of a short mini-documentary that Open Road provided  on Peter Bowen. It's funny, too, but a serious kind of funny. http://video.openroadmedia.com/nJMhj/meet-peter-bowen/
Posted by Oscar Case at 11:59 AM 3 comments: Links to this post

This time the movie is Blue Steele with John Wayne, Eleanor Hunt, and George Hayes made in 1934. John Wayne is a Marshal looking for the Polka Dot Bandit (Yakima Canutt). First thing Wayne does is hide himself in a hotel lobby to watch the goings in the hopes he can catch the Bandit. George Hayes is the Sheriff and he is shown to a room with a hole in the floor where he can watch everything that goes on, too. The Bandit sneaks into the hotel and cracks the safe, stealing $4,000, but Hayes sees only Wayne looking into the safe after the Bandit leaves and thinks he stole the money, so he sets off on his trail. He finds Wayne alone in a cabin cooking beans and instead of arresting him, Wayne talks him into having a bowl of beans and they become "Pardners".

The real plot of the movie is that a local businessman is holding the town hostage to get the gold mine that the town sits on and prevents any supplies from reaching town. His gang robs a supply train and kills Eleanor Hunt's father and takes her hostage. Wayne and Hayes interrupt the holdup and chase off the thieves with Wayne falling in love with the girl before the robbers steal her away and lock her up in a hideout owned by the big businessman. After three or four shootouts between the good guys and the bad and three or four fist fights between Wayne and the bad guys, Wayne frees the girl, takes the provisions to town and alerts the townspeople about what is really going on and arrests the Polka-Dot Bandit, and everyone is free to enjoy life again.

The black and white photography leaves a little to be desired in places, but the acting is fine and Wayne looks like a teenager. This version has the Title misspelled, e.g., Blue Steele not Blue Steel. Steel never enters into it anyway and why it's named Blue Steel is beyond me unless they are referring to the pistols used.
A fun romp through an early Western.
Posted by Oscar Case at 11:39 AM 9 comments: Links to this post

Errol Flynn as JEB Stuart and Ronald Reagan as George Custer were sent to Fort Lawrence, the last outpost of civilization at the time. Olivia deHavilland was the daughter of the man who was going to build a railroad to Santa Fe, not Raymond Massey who was playing John Brown, but I don't remember who played the railroad builder. Anyway, the Army was sent to protect them from the assaults of John Brown who was raiding the people going West and taking their supplies and arms. Lo and behold, John Brown raided the caravan of the railroad to get his rifles which were being shipped to him under an assumed name as Bibles, but the Army fought him and his followers off and captured the rifles. Then there was a showdown at Palmyra, Kansas, where John Brown's raiders were decimated and Mr. Brown decided to get the Hell out of Kansas. That's the end of it until Brown shows up in Harper's Ferry launching a surprise attack. Custer and Stuart are in the middle of the battle and finally defeat Brown for all time. Lee J. Cobb plays an army feller named Raydor(?) or Raynor(?) who had to quit the army but was in the same West Point class as Stuart and Custer. He worked for John Brown after the Army and ends up getting shot by John Brown himself when Raydor/Raynor turns on him.

I was hoping that the movie was about the Santa Fe Trail, but was satisfied with the John Brown aspect of it for the reason I commented about earlier, which was that John Brown while being held at Harper's Ferry wrote one of his last letters to a Lora Case, a distant relative. And this brought to mind that  Harriet Beecher Stowe, who wrote Uncle Tom's Cabin, was a distant relative from my mother's branch of the family. The first time I saw this movie, I had no idea that there was this connection to anti-slavery and thought the movie was tiresome and boring, like who was John Brown? When I later got into genealogy and family history, I was really surprised to learn this and, now, I brag on it about every chance I get.This time I thought the movie was an entertaining flick with the actors doing journeyman duty.
Posted by Oscar Case at 9:57 AM 8 comments: Links to this post

Story of the American West

I've been reading this book, Story of the American West, Legends of Arizona, by Carol Sletten and Eric Kramer for the last few months and finally finished it over the last weekend. It is almost like a text book in that it is full of well-researched facts, dates and material that school teachers used to make you memorize. It is the history of the White Mountain area of Arizona and brings to light the origins of many of the small towns like Snowflake, Showlow, Alpine, Greer, Vernon, Springerville, St. Johns, etc., beginning with the Mexicans who herded sheep there and continuing through the Apache struggles and on up to the present day.

The authors tell about Geronimo and Cochise, Alchesay, and the Hash Knife Outfit and the later Outlaws and Outlaw Gangs. It covers the murders of prominent and not-so-prominent citizens and the dam building and dam failings, the floods, agriculture and crops of the area and a brief survey of the medicine and doctors available as things built up.

The book was researched over twenty years and has pages of references and an index that helps the reader get through it all. My only complaint, and it's a minor one, is that on occasion the authors would quote someone or something and just leave it with no explanation or not enough context. Some readers may never notice, but it stuck in my mind as I read along that there should have been another sentence or two. Other than that I thoroughly enjoyed the book and look at the White Mountains and the Apaches in a new light.

From the back cover, "Story of the American West tells of Hispanics as Conquistadors, Indian fighters and sheep men. Genetics, language and archaeology are used to trace Native Americans from entry into the New World through development of Hopi and Zuni culture to the arrival of Navajos and Apaches.

"Through their twenty years of research, authors Carol Sletten and Eric Kramer discovered why it is no coincidence that Zane Grey, the West's greatest mythmaker, made frequent trips to east-central Arizona to gather material."
Posted by Oscar Case at 1:41 PM 11 comments: Links to this post

As we start the new year, we must end the last one, and the only thing that will do that is watching the Fiesta Bowl as Kansas State beats Oregon today! And that's what I will be doing! Sorry, Ducks!
Posted by Oscar Case at 1:31 PM 5 comments: Links to this post