This is one of the Angus bulls on my niece's ranch in Altonah, Utah: 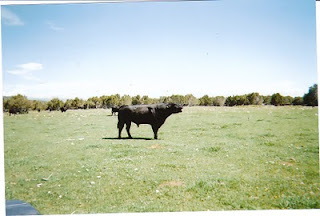 Taking it easy in the mid-day sun in the shade of a cedar tree: 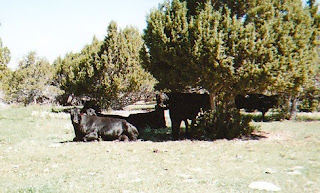 A few animals out in the pasture, eating grass and enjoying the morning sun:

I admit, my throw-away camera doesn't do the best job, and adjusting the photos is not always possible with my knowledge, but it gives you an idea of the terrain and the general atmosphere.

Here's one of the vegetation along the roadway into Duchesne: 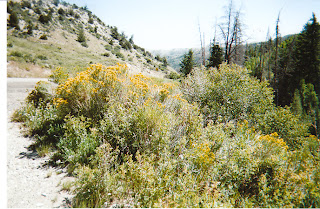 Don't ask me identify them.

I have a few more that I will post, taken around Bluff, Utah, the location of one of the novels I'm working on, called Murder Under the Cliffs.
Posted by Oscar Case at 6:31 AM 5 comments: Links to this post

A few days off

The wife and I travelled out of town over the weekend of Aug 14-15, leaving Wednesday evening and returning Monday afternoon. The purpose was to attend another family reunion, this time my father's side of the family. Overall, the trip was a pleasant one, but after all of it, it just confirmed the fact that long car trips are not for me anymore, and this one was not all that far, only 15-1600 miles roundtrip. Here it is, ten days later, and my body and brain can't get going. Our itinerary was as follows: one night in Flagstaff, one night in Moab, UT, two nights in Altamont, UT, one night in St. George, UT. (The proprietor of the motel in Altamont raises longhorns, and had the same last name of one of my classmates in elementary school in the late 1930's, but said he didn't know her.)

This get-together is held every two years during the Duchesne County Fair, but not because of the Fair. The Party Pasture is booked up through the summer, and our weekend always falls during Fair Time. Some of the family have projects and stuff entered in the competition, and some of the younger relatives have 4-H entries, but that has petered out since one of them won the Grand Champion Bull trophy a couple years ago. In years past, the family has had rodeo riders, horse entries (male and female), calf roping, etc., but I didn't hear of any of that this year.

Back in the party pasture, though, things were rocking, kids were playing basketball, chasing the dog, and generally getting in the way of the adults. There were more kids there than past years and all were having a good time, no quarreling, fights, or anything of that nature. The auction on Saturday is always a big and fun thing with people bringing stuff they don't want anymore. I donated two copies of The Stranger from the Valley and three copies of The Upamona Gold Claim Wrangle. I didn't bring any to sell  because of the taxes and license requirements. Anyway, one book brought $50 and the others sold for $20 - $30, which I thought was quite a bit for pocket books, but relatives, "not everyone has an uncle who writes," said one of my nieces. All the money from the auction will go toward the next reunion, though.

Another niece's husband gave me a tour on a four-wheeler around a couple of his pastures to see his Angus cattle, and discuss water and the winters and other stuff. Will post a couple of pictures in an upcoming blog.
While I was up there I managed to catch a bug and went to the doctor when I came back. The medicine I was given is almost worse than the bug - it makes me dizzy, no appetite and fatigued, but I am on the way to a full recovery and will be back in the swing shortly. It will take awhile to catch up on all the blogs and stuff, if I can find the time.

Here's another novel written way back when I was a pup, and the edition I have was published in 1941, the Fourth Printing by Triangle Books, 14 West 49th Street, New York City. No dust cover left on this one.

The protagonist is Jim Benbow, the ranch foremean for the Hat Ranch, who has been working for Jack Dale since he rode in from Texas as a young kid ten years earlier. He had been working as the foreman for the last five years. Of course, Mr. Dale has a daughter named Connie who is getting ready to marry Clay Rand, long-time friend of Benbow, but likes to gamble and owns a small ranch called Short Arrow across the valley.

Antagonist is Cash Gore, owner of the Running M, and cattle rustler. Clay owes Cash a debt for ganbling on something and is tipping him off and helping him in the rustling operation.

I haven't read any Haycox books since the late '40's or early 50's and don't remember enough for comparison, but I found Deep West a little boring and tedious with all its descriptive writing and it takes a long time get to the final shootout that ends the troubles in Two Dance and the Yellow Hills.

But Benbow and his cohorts finally work through the struggle and put the rustlers out of businees, during which Clay gets shot, old man Dale dies, and Benbow gets the girl and half the ranch.

I can say that the story provided a good read, even though it was too descriptively detailed about everyone and everything to my way of thinking.

(NOTE: No money or gift was received for this post.)
Posted by Oscar Case at 10:34 AM 5 comments: Links to this post

What the Old Cattleman sez in Wolfville, about the struggle of writing poetry, is about the same way I feel about it. He sez:

"I recalls...[etc.]......I gets locoed lovin' this girl I goes bulgin' out to make some poetry over her. I compiles one stanza; an' I'm yere to remark it's harder work than a June day in a brandin' pen. Ropin' an' flankin' calves an' standin' off an old cow with one hand while you irons up her offspring with t'other, from sun-up till dark, is sedentary compared to makin' stanzas."

The Old Cattleman goes on to compose his stanza, but I'm still tangled up in mine, not knowing if it has to rhyme or contain so many lines. Where do I begin, where do I end, what goes in the middle? Does it have to sound like a song, with the wording all rythmical and pouty? Whew! Let's begin:

"There once was a man from Clyde,
Who fell through a hole in the outhouse and died.
Along came his brother,
Who slipped through another,
And now, they're in"terred" side-by-side."

Man oh man, that was a tough one! But I think it is limericky instead of poetry, and next time don't be so raunchy.

The Old Cattleman knocks out his four-line stanza and says:

"I'm plumb tangled up in my rope when I gets that far, an' I takes a lay-off. Before I gathers strength to tackle it ag'in, Jenks gets her [the girl he's writing the poem for]; so bein' thar's no longer nothin' tharin I never makes a finish. I allers allowed it would have been a powerful good poem if I'd stampeded along cl'ar through."

Thanks to Ron Scheer of buddiesinthesaddle.blogspot.com for steering me to Alfred Henry Lewis and Wolfville, which I'm getting a real kick out of, since I like that kind of writing - Lewis's, not mine.
Posted by Oscar Case at 5:52 AM 5 comments: Links to this post

Couldn't find much on Mr. Foster on the net. Amazon has a list of twenty books on his Author's Page, but no bio. Among the books are: Gila City, Badlands, Trigger Kid, Pot Luck, Payoff at Ladron, Bullets for a Badman, Rough Mesa, and others, including The Owl Hoot Trail.

In this one, the Wyoming Kid as he became to be known was innocently caught up in a bank robbery, sent to jail, busted out by the real outlaws and joins up with Brick Mahoney, one of the outlaws. At first, he is reluctant, but as he gets further involved, he begins to believe that there's no way out and turns into an outlaw, almost. He was about to inherit a ranch when he got caught up in the robbery, and finally gets some help to get the mess straightenend out from someone he never expected.

How he got into and out of this mess is an interesting read, and the outlaw Brick Mahoney had no small part in it. They both have to fight off their partners in crime and the law to eventually prove his innocence and ride off into the sunset with his new girl.

I liked this one. The book I have is the Second Printing, 1945, by the World Publishing Company. Although the dust jacket is still intact, it is in bad condition, being torn up the back. The front is still in fair condition: 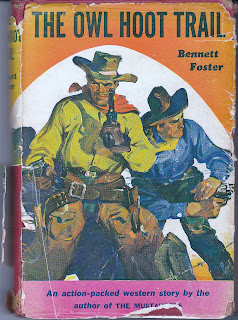 The pages of the book are faded to a a light-brownish orange color, but still very readable.

(No money or gift was received for mentioning this book.)
Posted by Oscar Case at 6:14 AM 8 comments: Links to this post

Jim Wells threw a saddle on his Appaloosa near Red River Crossing and headed out on The Long Trail Home. The Colorado Range War was over and he was anxious to get back to The Finest Frontier Town in the West Beyond the Verde River in the Hardscrabble Valley. He followed The Twisted Trail through Wild Horse Gorge and ran directly into an Ambush at Devil's Whip, a dangerous turn in the trail, and was almost Shotgunned by a bunch of Bushwhackers.

"Well, I'll be The Second Son!" said Wells. "What do those Tumbleweeds want from me? I'm just Passin' Through and I ain't carrying anything valuable like the Glitter of Gold that most trail jumpers jump the trail for. We'll just send 'em A Slug of Hot Lead and just wait to see if there's any Aftermath from it."

"It looks like we left a little Blood on the Rimrock! Why did that Drifter try to kill me? He must've thought that I was following him, but he didn't live to Tell it to the Hangman. Come on, we only got One More River to Cross and we'll be home if we don't take that Sidetrip to Sand Springs. That feller may have been the Junction Flats Drifter, but he won't be drifting no more."

Match 'em up with the Author:

Name the actor in the one movie-only title (Tumbleweeds) in the story.

Sorry, the winner will get a "Well Done" is all.
Posted by Oscar Case at 6:25 AM 7 comments: Links to this post