Who wouldn't have the blues or the angers or both while staring into a glass of Maryland Rye and thinking about what the Hell just happened?

Cash Laramie was upset about the turn of events he had just gone through bringing in a horse rustler. Bringing in the thief didn't particularly have an effect on him until he heard what actually happened. And that makes a great story by Edward A. Grainger who adds a moral dilemma to Cash Laramie's life that can never be undone and has him staring into that glass of whiskey.

David Cranmer, writing as Edward A. Grainger, tells this story, Reflections in a Glass of Maryland Rye, in his Second Volume of The Adventures of Cash Laramie and Gideon Miles along with other great stories. The story not only made Cash think, but made me ponder the dilemma with him minus the whiskey. Next time I'll guzzle on a glass of Cabernet Sauvignon as I entertain myself and get lost in the works of David Cranmer's action-filled and suspenseful writings.
Posted by Oscar Case at 10:40 AM 6 comments:

It Must Be Thanksgiving!

I'm off to eat turkey and cranberries with the family about 10 miles away .
Posted by Oscar Case at 9:00 AM 5 comments:

The Education of a Pulp Writer

I've had this book of short stories on my PC for quite a while waiting for time to read it. And now that I've read The Education of a Pulp Writer and other stories by Edward A. Grainger, I will say a few palabras about it.

The first story, Blubber, left me laughing like a crazy man and brings to mind the recent stories of overly obese people that were on the news being taken out of windows or gigantic holes in the wall.
And not to give the ending away, I'll just say that it, too, could've been on the morning news with some censoring of some aspects of it or maybe a movie short on HBO. It could happen.

The other stories were not as funny, but had their own elements of drama and suspense. The story of Cash Laramie, the only western in the volume, was mighty fine, too., as Cash must take an unusual outlaw prisoner from a Sheriff's Office in Vermillion to the Marshal in Cheyenne, a two-day ride. The outlaw, Kid Eddie, was the exact opposite of a crazed killer arsonist that the wanted posters said he was and I was wondering if they would complete the journey. Well, did they? Yes, no,or maybe. You'll have to read it for yourself.

Everybody, by now, knows or should know, that Edward A. Grainger is the pen name for David Cranmer, author of the Beat to a Pulp blog and editor of the magazine of the same name. And a fine writer and editor he is, too.
Posted by Oscar Case at 10:00 AM 7 comments:

Excerpt from Trouble at Sagrado Ranch

A few words from Chapter 6 of Trouble at Sagrado Ranch:

"Let's go watch the wrangler break a horse or two," (said Legrand).
"Sure, before I get involved in this stuff," I said, getting up.
We walked to the corral near the barn that had two horses inside, a beautiful black and a sorrel. Pa was in the corral with Lute Kempus, who had just tethered the sorrel to a post in the corner and was getting ready to throw a rope on the black so he could put a saddle on him.
"Getting ready to tackle Black Velvet, is he?" LeGrand said to Pa.
"For the second time, yup. He got throwed off the first time."
LeGrand yelled to Lute, "Want me to hold that rope while you throw on the saddle?"
"Nah, not this time," said Lute.
The slim, bronzed wrangler was confident in what he was doing and had no trouble putting on the bridle and saddle gear.  The black gelding stood quietly, keeping his eyes on the wrangler, wo climbed jauntily into the saddle, holding the reins and getting settled. He no sooner got situated than Black Velvet lifted his front legs and dropped them back to the ground. He raised his back legs with a sudden jolt to the rider, trying to throw him off.
Lute was expecting that and as soon as the back legs hit the ground, the horse took off in a run around the corral, stopping abruptly and sliding to a stop. Velvet started bucking and rolling with Kempus holding the reins and the saddle horn with his right hand and trowing his left in the air on each jump. The horse stopped, puffing hard, twisting his head and without any particular notice to the rider made a kick and put his front and hind legs touching in a wild buck. Lute went flying over the fence, landing on his head and shoulders, the momentum carrying him in a somersault and coming to rest in a sitting position in the dirt, unhurt, his hat askew, but still on his head. Kempus sat there, his arms resting on his bent knees, taking a few deep breaths, and staring at the hills in the distance.
"Is that a new way to practice cartwheels, Lute?" said Pa, laughing. "Yer goin' to need some of that mustang liniment tonight for those shoulders and leg joints."
Lute was sitting on his behind looking out over the horizon. "I'll be fine, Mister Hawkins. I was just admirin' the view of the hills, is all," said Lute, still panting. "I think that horse was trying to kill me, though."

Get your copy from amazon.com at a reasonable price on Kindle or paperback and enjoy.
Posted by Oscar Case at 2:44 PM 5 comments:

By golly! The short story anthology of Nikki Mcdonagh entitled Glimmer is certainly not a Western. There are no cowboys or Indians anywhere in sight or even a pile of prickly pear. But the stories prick at my inner conscience like ghostly wind over the desert. Ms. McDonagh has created a world that is like an out-of-body experience almost. At least the stories took me out of my confined world and took me into science fiction, a little horror, drama, and wonder. She has a fine imagination and writes with a certain savoir faire style that takes you on a mental journey into another world, a world of creativity that sucks you right into a whirlwind of emotions and thoughts. There is the world of the Lost Girl and the world of Art, and an imaginative tale of a book and its owner, flotsam, and what I imagined as an alien in the opening story.for which the book title is named after. And there is the sick woman returning home with a fatal tumor. Intriguing, interesting, and creative.

I'm a Western sort of guy and don't get into other genres very much, but I certainly enjoyed reading Glimmer as great entertainment. It was 133 pages of fine writing and inventive imagery nicely done. I will give it at least four out of five stars and recommend it to fans of science fiction and horror and anyone else who likes a good read.
Posted by Oscar Case at 9:18 AM 5 comments:

According to Wikipedia, Buffalo Bill while working for the Pony Express covered 322 miles in 21 hours, forty minutes using 21 horses, (which is just over 15 miles an hour). His relief rider had been killed and he made the round trip between Red Buttes Station and Rocky Ridge Station. Quite a feat!

Over the past two or three years, I dip into an Anthology by J. Frank Dobie called I'll Tell You a Tale, ever so often when time permits. In this anthology Mr. Dobie wrote a tale of one Francois Xavier Aubry entitled Little Aubry's Ride. This Aubry feller was a little guy, weighing not much more than he could eat in a day or two, say a hundred pounds give or take a little. Well, this Mister Aubry was a tough little nut who traveled between Independence, Missouri, and Santa Fe New Mexico, delivering freight. He bet a thousand dollars that he could make the ride in six days. It was over 800 miles that he had to ride. The total time it took him was five days and 16 hours, actual riding time he figured was four and a half days. They said his saddle was bloody when he he got off the horse at the end of the ride.

Well, there is much more to learn about both of these horsemen at Wikipedia.com and also the famous writer J Frank Dobie and his writings. Interesting men, interesting books.
Posted by Oscar Case at 11:57 AM 11 comments:

All right. It seems that blog viewers have been visiting my blog to see what is going on over the last couple of months or longer in droves as expressed by the stats:

This is a considerable increase from the days of yore when it took forever to reach 5.000.

I think the increase is due to my joining more sites like Twitter, where I tweet maybe once or twice a month or joining a couple of on-line clubs. I'm also on Pinterest, but it has a low following so far. The biggest thing, I think, is the RSS feed, Feedspot.

In any event, I hope the people viewing the blog find something of interest to keep them coming back.  Thanks!
Posted by Oscar Case at 9:59 AM 7 comments:

After a delay, Bob Boze Bell was the main attraction at the luncheon put on by the Lion's Club of Sun City on Saturday, November 1, 2014. It was the annual "Legends of the West" event. For those who may not have heard of Mr. Bell, he and others bought the nationwide magazine True West in 1999 and he is a true Legend of the West. Artist, Illustrator, Author, Publisher, Editor, Mr. Bell has written and illustrated ground-breaking books on Wyatt Earp, Billy the Kid and Doc Holliday and his series on Western gunfights, Classic Gunfights. His artistic works include gouache, scratchboard, oil and watercolor of cowboys, Indians, Figures, and horses of the West. His artwork has appeared in Playboy, Wild West, National Lampoon, Arizona Highways and others. He is featured on Encore's Western Channel daily and has appeared on the History Channel, Discovery Channel and the Westerns Channel. Mr. Bell has illustrated for Disney's production of A.K.A. Billy the Kid, and War in Lincoln County by Northport pictures, Discovery Channel's Outlaws and Lawmen, and the PBS production entitled Alias Billy the Kid.

He entertained the audience for about 15-20 minutes after lunch, talking about growing up in Kingman, Arizona, and facts and non-facts of certain biographies of Western legends like Wyatt Earp and Billy the Kid. His interest in western history goes back to his younger days of buying True West at the local drugstore and reading and collecting stories of the major outlaws and lawmen of the Old West. He talked about buying the magazine and the early troubles he and his partners had with it, losing thousands of dollars a month until he found someone who actually knew about publishing a national magazine and turning it around to a profit-making deal.

The audience gave him a big hand and a couple of questions were asked before he put out a few books he had brought to sell. They sold quickly and he was out of there before we knew it. He must have been pressed for time.

The bio above came from the program, the cover of which is below. 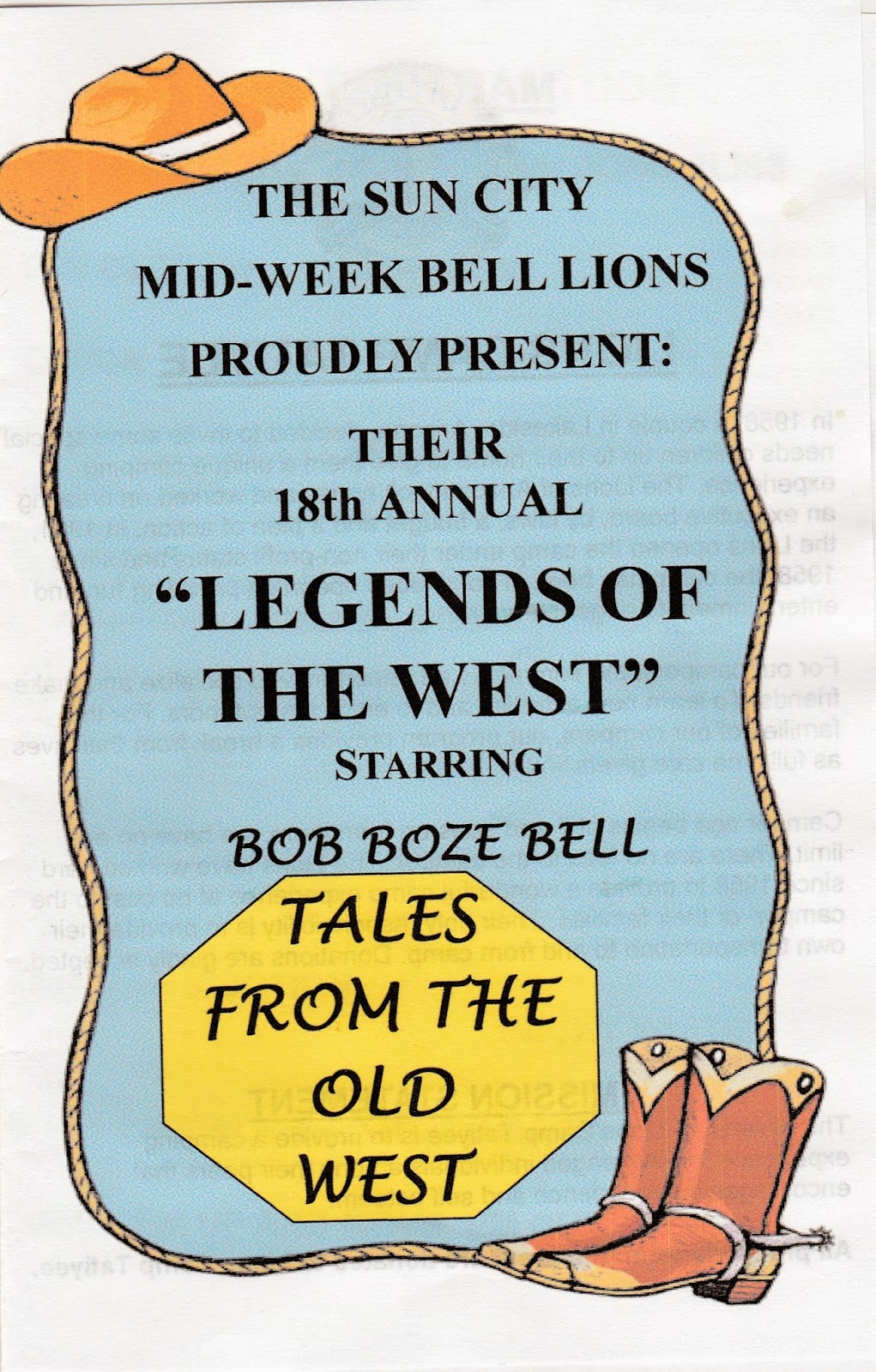